I think it is safe to say that just by being human, we are familiar with the art of deceit and manipulation. Whether it is more common to be a victim or a culprit of such tactics, I don’t know, but it’s not uncommon to be both, either.

You’ve seen it in literature, in films, in life–deceit is everywhere. More often than not, the perpetrator is seen as a villain–take, for example, Iago in Shakespeare’s Othello, or Napoleon in Animal Farm. The question is, why? Being a manipulative hero isn’t so bad either.
Just look at Dantès in The Count of Monte Cristo. Okay, maybe he’s not a complete hero, but I’d certainly like to be as boss as he is (just without all the tragedy).

Villain or not, manipulation is an exceptionally effective and useful tool in getting what these characters want.

You see, telling a lie isn’t always such a terrible thing. (Don’t get me wrong, though–I certainly am not advocating a life of lies and deceit.)

Just think of the last time you smiled and shifted uncomfortably as you told your friend’s dear mother that her cardboard chocolate chip cookies were divine. Okay, maybe that’s just me.

If we’re talking about manipulation, though, Othello‘s Iago pulls it off perfectly. He has the immaculate facade of a well-disciplined, honest man, fooling others into believing that he is not the sly fox that he is. He doesn’t even have to lie–everything is perfectly planned through subtle gestures and seemingly harmless, well-intentioned comments.

And while we’re at it, the same kind of manipulation is found everywhere in food. “What?” you say. “Manipulation?” It may not be the kind you are thinking of, or the harmful kind that Iago uses, but keep with me here. Assuming that the same ingredients are used in each, take a look at the different cupcakes below:

Which would you rather eat?

Most, I think, would respond to the first one. But what if I told you that the second one tasted five times better? What is it that makes the first seem so much more appetizing than the second? The answer is presentation.

Presentation, not just in food but in everything else, is key in making first impressions. People are drawn to aesthetics, so things like beauty and cleanliness make things more enjoyable, even if they are only on the outside. So if it looks great, it must taste great, right? Maybe not. But what presentation does is set up expectations–people are attracted because they want their expectations to be met. Whether they are or not is up to them.

Even though the cupcakes are made with the same ingredients, it is very possible for one to taste completely horrid while the other tastes like it was made from unicorn flour. Perhaps the baker over-mixed the batter or measured the flour incorrectly for one of the batches, making it taste like dense, hard bread. But all it takes is some subtle manipulation–different cupcake liners, a different piping tip for icing, and sprinkles for it to look just, if not more delicious than the other, more successful batch. This magic is all part of presentation. Making your food look good doesn’t always have to mean that it tastes the same. If anything, it makes the eater more pleased than if the food looked messy and unappetizing. Deceit? Maybe. Harmful? Nope.

Presentation can be more than just subtle. After all, the visual sensation you get from food is makes just as much of an impact as the flavor–that’s why restaurants put so much effort into perfecting it. Also known as plating, the presentation of food involves a plethora of different factors, including color variety, garnishes, placement of food, empty space, use of liquids, and the like. The visual appeal is really what ties up your experience with the food.

It is quite interesting, however, when you really experience the true powers and abilities of presentation.

A few years ago, I was coming back from Asia on JAL (Japan Airlines). For the first time, I sat on Business Class, and you could really tell the difference between Economy and Business airplane food–it was like climbing up from a peasant to a knight. Seriously. It was beautifully presented in a traditional Japanese wooden bentou (lunch) box, and the colors and arrangement of all the different components actually made me excited to eat airplane food. It looked somewhat like this: 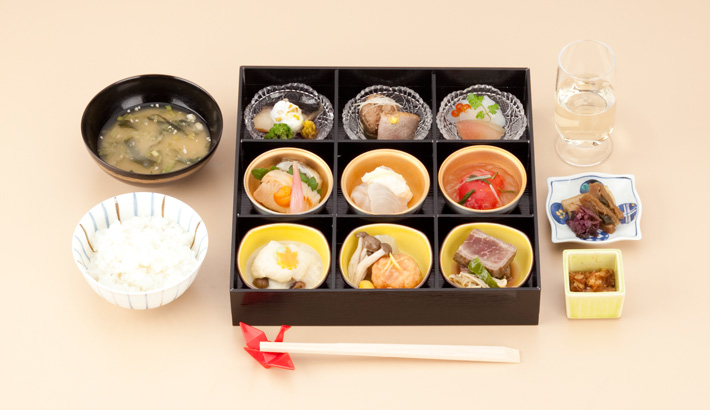 Okay, maybe it wasn’t exactly this, but it was close

Wouldn’t you be excited to eat this too? But alas, I was disappointed.** I won’t call its appearance a complete lie, but I won’t go into details about just how bad it was (almost everything tasted fishy or like plastic). I will, however, mention one thing: the presentation compelled me to try everything in the box, despite having an idea of how unappetizing everything else would taste. If it were presented to me in the normal, film-covered paper bowl so ubiquitous in airline cuisine, I wouldn’t have bothered, or even considered trying all of the food. Because it was so nicely arranged, I gave everything a chance. Of course, I regretted it later, but the point is, the presentation was powerful enough that I wanted the food to taste better than it did; and so, it probably left a slightly better impression on me than it would have otherwise.

So manipulation  and deceit aren’t always bad things. They can always be used to create better impressions on people, so long as they aren’t harmful or overused. Whether you are a chef, a teacher, a parent, a friend, we can all be heroes by using its art effectively and with good intentions; who’s to say manipulation is only for villains?

**Disclaimer: JAL is still a super airline with super service and super flight attendants. Don’t avoid booking a flight with them based on my opinion!!

7 thoughts on “The Art of Deceit: Why presentation matters”